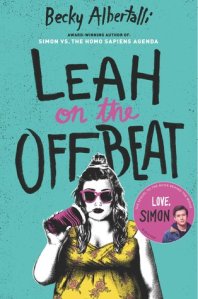 Leah on the Offbeat by Becky Albertalli
Published April 24, 2018

In Simon vs. the Homo Sapiens Agenda, Becky Albertalli not only gave us an incredibly sweet gay romance, she also created a close-knit group of friends who are diverse, emotional, dramatic, and, most importantly, believably teenage. Arguably the hardest to understand was complicated, prickly Leah Burke. Leah on the Offbeat puts the burgeoning drummer front and center in this sweet, but angsty, story of self-discovery set against the emotional backdrop that is senior year.

As in the previous Creekwood/Simonverse books, Albertalli captures the teenage experience so well. I’m definitely not a teenager anymore, but the pop-culture filled dialogue, emphasis on social media, and the messy emotional space of trying to decide if you have a crush on someone or are just flattered to be liked, rang true for me. I also couldn’t help smiling at the DRAMA of it all! I’m sure all of us remember stressing about problems or situations that felt all-important at the time, but in retrospect really weren’t all that big of a deal.

Like Albertalli’s other books, Leah on the Offbeat can be broadly classed as YA drama with a fluffy ending. Leah herself may be a more cynical (although no less oblivious) narrator than Simon Spier, and she’s less inclined to wear her heart on her sleeve, but the various tangled plot threads all wrap up neatly into an ending that will no doubt satisfy fans of the characters.

Often the most intriguing fictional characters are those that really don’t have it all together yet, and that definitely describes Leah Burke. Her narrative voice is sarcastic, stubborn, and completely unapologetic, but underneath her take-no-shit exterior, she’s kind of a confused mess – particularly when it comes to her feelings. What’s so interesting about Leah on the Offbeat is how Albertalli manages to craft a story in which the reader often knows more about the first-person narrator’s emotional state than the protagonist does! Yes, it takes awhile for Creekwood High’s “resident fat Slytherin Rory Gilmore” to realize that she has a crush on someone who is definitely-totally-probably-maybe not? off limits.

Although romance is once again a major part of the plot, and I’m thrilled to see young bisexual women gaining some much needed representation, to be honest I was more invested in Leah Burke’s personal journey. If something isn’t perfect then Leah withdraws completely, likely in an attempt to fend off rejection. It’s incredibly relatable. How many times have I rewritten reviews striving to find the perfect word until it’s published so far after the fact that it’s no longer relevant? Watching Leah accept that things don’t have to be perfect, that things can have imperfections but still hold value, was really special.

I’m not normally a seasonal reader, but Leah on the Offbeat strikes me as the perfect Spring/Summer book. From the colourful cover to the bittersweet goodbyes of senior year within, this is a book that’s meant to be read outside. It may not have grabbed me in quite the same way as the first book in the series, but if you’re invested in the lives of Simon, Leah, Blue, Abby, and everyone at Creekwood High, like I am, it’s definitely worth reading.

One thought on “Books: Leah on the Offbeat”