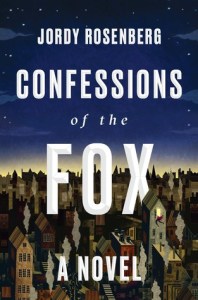 Confessions of the Fox by Jordy Rosenberg
Published June 26, 2018

I’ve been more selective this year with my book choices. Although I’ve recently relied not just on a high goodreads rating, but also on recommendations from trusted friends and fellow book bloggers, I broke this pattern and picked up Confessions of the Fox because it offered something I’d never read before; A historical fiction novel featuring a transgender protagonist written by a trans author! Historical fiction is one of my favourite genres but, like science-fiction and fantasy, it can often be very white, straight, and cis. I wasn’t ultimately the right audience for Confessions of the Fox, I found it too academic, slow-paced, and explicit in its discussion of both bodily functions and sex for my personal tastes, but I’m glad I picked it up anyway and I’m thrilled that this diverse and unique novel exists.

The frame narrative features academic professor Dr. Voth’s discovery and annotations on a long-lost eighteenth century manuscript that chronicles the adventures of English folk hero and jail-breaker Jack Sheppard (fictionalized most memorably in Brecht’s Threepenny Opera) and his lover Edgeworth Bess. Through an extended series of footnotes, some annotations on 1700’s rogue slang, but mostly Dr. Voth’s tangential thoughts about his ex, the Dean of the University where he works, and finally the manuscript itself, Dr. Voth attempts to authenticate the document. He’s elated to find that not only does the manuscript appear genuine, but it sheds new light on the story of the English folk hero, asserting for the first time that Jack Sheppard was transgender and that his lover Bess was of South Asian descent.

I wanted so much to love this speculative and distinctly queer retelling and unfortunately I didn’t, but some elements of the book work very well. Early chapters captured my interest quickly as the character of Jack, who was assigned female at birth, grows up in servitude as a carpenter’s apprentice, but breaks free of his confines and comes into his own. Moments like Jack’s pride when he hears a sex worker refer to him as “handsome boy” in the street, and his confidence when Bess accepts him for who he is, were touching and I rooted for Jack throughout. I also enjoyed Jack and Bess as characters. There is an earnestness and youth to Jack, and to the way that he loves, which I found appealing. Bess, often the wiser of the two and coming from her own tragic path, also grabbed me.

Where the novel mostly falls down is in the frame narrative. Early on the book’s annotations are focused generally on the text, offering context and clarification about the language used. As the annotations increased in number and length though, I lost interest. I just didn’t care about the frame narrative. At all. Dr. Voth, as a trans academic discovering what he believes to be the earliest memoirs of a transgender person should have been a sympathetic and engaging character, but he added little to the story. Admittedly I’m not an academic, perhaps those who work in a university and deal with the bureaucracy on a daily basis would get more out of the author’s condemnation of the system, but I found all-caps annotations by a representative of the publisher were just hokey and took away from the more engaging story of Jack and Bess.

I understand that a queer retelling that focuses so much on the trans experience must, out of necessity, be somewhat explicit. In some instances I found this frankness both educational and engaging. I also suspect it’s an authentic portrayal of the way in which people in eighteenth century London would have acted and spoken, but as an ace reader, I did find the constant barrage of explicit descriptions of sexual acts, bodily functions, and genitalia uncomfortable.

Perhaps unsurprisingly, since the text deals with the discovery and authentication of a manuscript by a university professor and author Jordy Rosenberg is, yes, you guessed it, an associate professor, there’s also a very academic feel to Confessions of the Fox that just wasn’t for me. Those who are more inclined to read non-fiction, or who have a strong interest in queer/trans theory will undoubtedly get more out of the book than I did.

This reads as a very negative review, but I think it’s important to note that besides the pacing issues I mentioned, which mostly stem from failings within the frame narrative, the issues I had with Confessions of the Fox are largely personal ones. Other readers will get more out of this book than I did and I think it’s hugely important as an #ownvoices story about a trans character. I’m glad it exists, just don’t ask me to read it again.