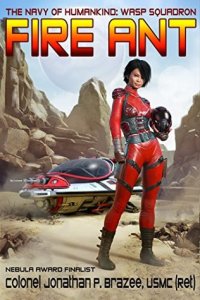 Fire Ant is both the last of my Nebula Award reads for this year and the least accomplished. It’s readable and there’s nothing glaringly wrong with it, but Fire Ant is your garden-variety military sci-fi tale of a plucky underdog who is selected to join an elite squad and must prove herself to her superiors and to her fellow pilots. Generic and predictable, Fire Ant is the novella equivalent of a popcorn movie; enjoyable enough while you’re reading/watching it (if you don’t think too hard, that is) but difficult to remember as soon as it’s over.

Floribeth “Beth” Dalisay is a member of the Off-Planet Worker underclass who has, by virtue of her 4″6 height, become a pilot for a mega-corporation that sends tiny one-person ships on missions of exploration. On a routine contract to search new solar systems for natural resources and/or habitable planets, Beth encounters a hostile alien presence who begin firing on her. Some fancy flying saves Beth’s life, but when she reports her encounter to the company, they ground her ship and impose financial penalties for equipment losses. Luckily the Directorate Navy is interested in Beth’s skillset and enlists her as a Navy fighter pilot.

I suspected Fire Ant wouldn’t be something I’d enjoy. There’s the rare exception (Yoon Ha Lee’s Ninefox Gambit is a clever, complicated, and well-characterized example of the genre), but military science-fiction (MilSF) holds very little appeal for me. Like many examples of its genre, Fire Ant offers an abundance of action, military procedure, and space battles, but is woefully short on characterization. By half-way through the novella I had started to skim, the extended training exercise descriptions and battle scenes making my eyes glaze over.

How, I wondered, does such a mediocre novella make it into an otherwise impressive slate of Nebula Award nominees? The answer seems to be through playing the voting system. A closed Facebook group of independent science-fiction and fantasy writers, including Brazee, put forward a list of authors with eligible works that they encouraged their members to vote for – and it worked! 6 of the works they suggested have been nominated for awards this year.

Undoubtedly a nomination will increase the visibility of a work, but I wonder if this approach doesn’t do as much harm as it does good. Sure I wouldn’t have picked up Fire Ant at all if it hadn’t been nominated for Best Novella, but when a work isn’t anywhere near the caliber of writing demonstrated by the other nominees in its category, it suffers by comparison.

Unfortunately, Fire Ant feels amateurish. Published under self-publishing imprint Semper Fi Press, I caught multiple spelling and grammar errors in Fire Ant that suggested it could use a more comprehensive edit. I don’t want to take away from anyone’s passion. I certainly haven’t written and published a book, so I have a great respect for those who follow their dreams and become a writer, but when you not only put your book out into the world, but then push to have it recognized by one of the most prestigious awards for science-fiction and fantasy authors, you open yourself up to criticism.